To evaluate the effect of curcumin on the development of cardiac hypertrophy, econd group of Dahl rats which were on a high- salt diet were orally administered curcumin for 5 weeks, starting at age 6 weeks. Curcumin significantly inhibited the increase in left ventricular posterior wall thickness associated with high-salt-diet-induced hypertension. In addition, inhibition of cardiomyocyte hypertrophy was histologically confirmed. Taken together, these findings demonstrated that curcumin inhibits not only the development and aggravation of hypertensive heart failure (systolic dysfunction) but also the formation of hypertensive cardiac hypertrophy (diastolic dysfunction). In the hypertension model, curcumin directly acted on cardiomyocytes to inhibit hypertrophy without lowering blood pressure, indicating that its mechanism of action importantly differs from that of antihypertensive agents (β-blockers, ARBs, ACE inhibitors). As such, curcumin may be more useful in treating cardiac hypertrophy and heart failure when combined with such antihypertensives.

Clinical application of curcumin will require comparison of its efficacy with that of existing therapeutic agents, as well as extensive evaluation of its additive effects. To this end, the efficacies of curcumin and enalapril, an ACE inhibitor and standard therapeutic agent for heart failure, were compared in a rat model of myocardial infarction 18). Curcumin was able to match the therapeutic effects of enalapril on heart failure, while heart function was additively improved on combination of the two. These findings indicate that curcumin has an additive effect with ACE inhibitors, indicating that its mechanism of action does indeed differ from those compounds and providing further support to the notion that optimum efficacy against cardiac hypertrophy and heart failure may be achieved via combination treatment with antihypertensives. 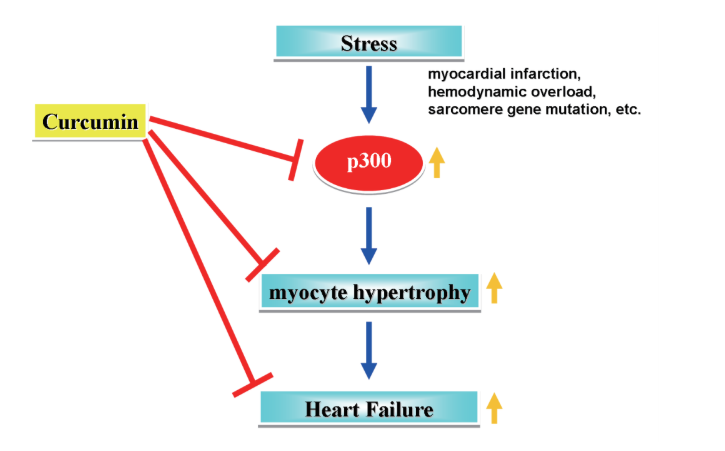 Given that curcumin showed poor oral absorption in rats even at 50 mg/kg/day, we used THERACURMIN® as an alternative in our studies, as orally administrated THERACURMIN® improved post-MI LV systolic dysfunction in rats at much lower doses (0.5 mg/kg) than curcumin 19).

To establish a fundamental pharmacological therapy for heart failure, we examined the common nuclear signaling pathway within cardiomyocytes, ultimately identifying the p300 HAT activity as a molecular target. In addition, we confirmed that curcumin, a p300-specific HAT inhibitor, inhibited hypertrophy in cultured cardiomyocytes and improved heart failure in animal models, with clinical trials in humans currently ongoing. These above-described findings suggest that a new therapy aimed controlling gene expression in the nuclei of cardiomyocytes as well as cardiomyocyte function may be within reach. Developing such a therapeutic regimen will in turn improve the quality of life and prognosis of patients with heart failure.

Another potential health benefit of curcumin is its antitumor effects. A Pubmed search using the keywords “curcumin” and “cancer” returned over 1500 articles published since 1983, with more than half published in the past 5 years. Curcumin’s antitumor effects have been shown in a number of preclinical cancer models, including breast cancer, colorectal cancer, head and neck cancer, leukemia, stomach cancer, liver cancer, ovary cancer, pancreatic cancer, prostate cancer, and multiple myeloma 20-22). Curcumin has been reported to affect the expression and activity of various proteins involved in cancer progression, particularly nuclear transcription factor-ĸB (NF-ĸB). In cancer tissues, upstream signals (growth factors, cytokines, and hypoxemia) can activate NF-ĸB, which in turn upregulates the expression of downstream proteins involved in anti-apoptosis (Bcl-2 and Bcl-xL), cell proliferation (cyclin D1 and c-myc), angiogenesis (vascular endothelial growth factor [VEGF] and interleukin-6), and metastasis (matrix metalloproteinases [MMP]), all of which can induce cancer progression 23). Curcumin’s NF-ĸB-inhibiting activity, together with its safety profile supported by its widespread use as a spice and traditional medicine for many years, therefore presents this compound as a promising new anticancer agent (Fig. 4). 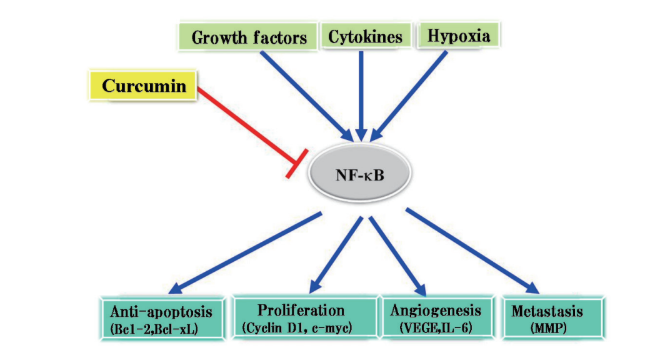 Fig. 4. Curcumin inhibits the activity of NF-κB, a factor involved in cancer progression.

On searching ClinicalTrials (http://clinicaltrials.gov/), a registry of clinical trials, using the keywords “curcumin” and “cancer,” we found that the number of clinical trials registered increased from 27 in October 2010 to 34 in May 2011.

In our Phase I/II clinical trial using curcumin in patients with pancreatic cancer who were resistant to gemcitabine, a standard therapeutic agent for pancreatic cancer 25), we evaluated the safety and tolerability of curcumin at 8 g/day in combination with gemcitabine-based chemotherapy. The daily dose of 8 g was selected because although no dose- limiting toxicity had been observed up to a daily dose of 12 g in an overseas Phase I clinical trial of curcumin, no additional increase in the blood concentration was achieved at doses exceeding 8 g, and continuing treatment at doses over 8 g is difficult due to the excessive bulk to be ingested. Because no predefined dose-limiting toxicity was observed in the first 3 patients, the Phase II clinical trial was continued at a daily dose of 8 g for all 21 patients.  No notable adverse events related to concomitant curcumin were reported, and the median compliance was as high as 100% (range: 79%-100%). In all patients, the median survival and one-year survival rate were 161 days (95% confidence interval: 109-223 days) and 19% (95% confidence interval: 4.4%-41.4%), respectively, promising attention was paid to the potential effects of habitual exercise results considering a dismal prognosis of this disease after  and eating habits on arterial stiffness, because the increase in getting refractory to gemcitabine, despite the relatively small arterial stiffness was traditionally considered an irrevocable sample size.

However, while the above findings are indeed promising, curcumin’s low bioavailability still compromised its clinical application. A number of studies have cited extremely low blood curcumin concentrations (Table 1), indicating that curcumin bioavailability needs to be improved to exert significant therapeutic benefits. 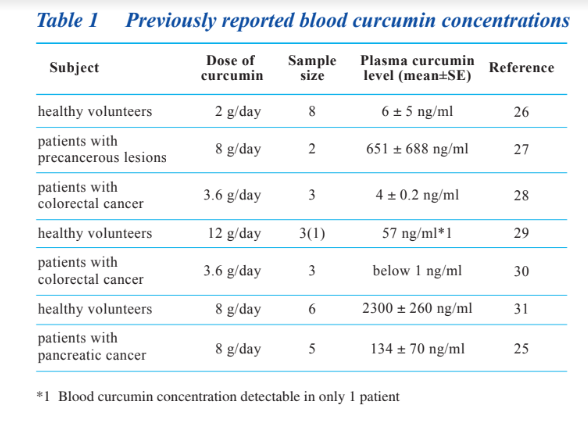 In Japan and abroad, efforts are now being made to improve the bioavailability of curcumin by developing new formulations using various drug delivery systems (liposomes, nanoparticles, and phospholipids) as well as derivatives with higher activity. In one pharmacokinetic study, maximum blood concentration (Cmax) in 6 healthy volunteers after ingestion of THERACURMIN® at a dose of 150 mg was 189 ± 48 ng/mL (mean ± standard error), which was higher than that observed with conventional curcumin at a daily dose of 8 g. The same 6 subjects also received THERACURMIN® at a dose of 210 mg after a 2-week period, resulting in a Cmax of 275 ± 67 ng/mL. These results further demonstrate the markedly improved bioavailability of THERACURMIN® compared with curcumin and dose-dependently increased blood curcumin concentration up to 210 mg in human 3). In light of these f indings, THERACURMIN® is expected to provide more reliable effects with higher blood curcumin concentrations, and a new clinical trial using THERACURMIN® is now underway to test its efficacy in cancer patients.

5. Efficacy of exercise and potential effects of curcumin on arterial stiffness

I) Exercise and arterial stiffness

Arterial stiffness is a risk factor for cardiovascular and cerebrovascular diseases that increases with age. To counter these risks, increased physical activity and habitual exercise in daily life may help prevent or inhibit this stiffness, thereby slowing the development of cardiovascular and cerebrovascular diseases in middle-aged and older people. Indeed, arterial stiffness has been shown to be lower in middle-aged and older people who exercised regularly such as by jogging, walking, or cycling than in those who did not 32). Similar findings were found in those with high levels of physical activity in their daily lives 33) or in those who took up relatively short-term aerobic exercise regimens (over 2 to 3 months) 32,34,35), all findings which support the notion that habitual aerobic exercise decreases arterial stiffness. Further, these findings are not limited to merely fit, middle-aged individuals, as habitual aerobic exercise-induced decreases in arterial stiffness have also been noted in both the young and elderly as well as in the obese 32,34-37).

We demonstrated that the arterial stiffness is decreased by curcumin (Fig. 5). Furthermore, we suggest that maximizing the effects of curcumin against arterial stiffness can best be achieved by combining habitual exercise and eating habits. Such a combination of exercise and diet with curcumin may represent a remarkably effective non-pharmacological therapy.

Japan’s rapidly aging society is experiencing increased social demand for healthy longevity. Meeting this demand via development of new highly functional food-derived substances and medicinal seeds from foods will require organically combining nutritional, pharmaceutical, and medical sciences using new methodologies and technologies. Studies to date have evaluated the interactions between pharmaceutical products and foods or their safety on an individual rather than comprehensive basis. As reviewed in this article, many studies ranging from basic studies to clinical studies have been conducted on curcumin and its clinical applications in treating various diseases. Given its range of effects, curcumin alone may be useful in treating and preventing a number of diseases, but fully establishing its potential will require further studies and clinical application.