2) Department of System Chemotherapy and Molecular Sciences, Division of Bioinformatics and Chemical Genomics, Graduate School of

6) Faculty of Health and Sport Sciences, University of Tsukuba

Throughout the world, societies have used both tradition and science to identify foods that can prevent and treat various diseases. In recent years, remarkable progress has been made in the pharmacological activation and clinical application of functional food- derived substances. In this review article, we focus on the functional food-derived substance curcumin, a primary component of natural turmeric (Zingiberaceae). Despite its range of reported pharmacological effects, including anti-oxidant, anti-inflammatory, and anti-tumor ones, curcumin is limited in its clinical applicability by its low bioavailability during oral administration. We therefore developed a highly absorbable curcumin formulation (THERACURMIN®) using nanoparticulation and surface processing techniques. Subsequent studies in humans have shown that THERACURMIN® is highly absorbable and mitigates liver dysfunction. Our translational research indicated curcumin’s potential as a therapy for heart failure by the compound’s inhibitory effect on histone acetylation of p300 in cardiomyocyte nuclei. Our clinical findings from a pharmacokinetic study showed curcumin’s potential for treating pancreatic cancer by inhibiting NF-ĸB activity. Finally, we showed combining aerobic exercise and curcumin improved arterial stiffness. These studies demonstrate that THERACURMIN® has improved bioavailability and, based on the pharmacology of curcumin, a number of beneficial effects. Further studies of THERACURMIN® and curcumin-related compounds are expected for their wider clinical application.

The Japanese population is an aging one, with respective life expectancies of 79.64 and 86.39 years in men and women as of fiscal year 2010, ranking fourth and first in the world, respectively. Consequently, more and more attention is being focused on the new academic discipline of Anti-Aging Medicine, which aims to slow age-related pathological changes. One important research subset in this field involves foods and herbs known to be particularly effective in maintaining and enhancing health. Given that these foods of interest have been shown to have remarkable pharmacological effects, comparable to those of existing pharmaceutical products, substantial research efforts are underway to elucidate the active compounds responsible for these positive effects.

One such food substance being examined is curcumin, a polyphenol found in turmeric at a content of 3% to 5% 1). Traditionally, it has been used as spice and colorant in Indian curries, as well as a component of Chinese medicines, and has been approved as a safe food in the US, where it is used in mustard, yellow pickled radish, and other confectioneries along with foods such as curry in Japan.

In recent years, a number of studies across the globe have investigated the various biological effects of curcumin 1,2). In addition to its reported cytoprotective effect, curcumin is known to exert an antioxidant effect by removing free radicals and an anti-inflammatory effect by inhibiting the activation of NF-ĸB 2). Two clinical trials investigating curcumin have concluded that the compound may be useful in preventing heart failure and effective against a range of diseases, including cancer and Alzheimer’s disease (Fig. 1) 2,3).

In the present article, we review the recent topics on curcumin including development of a highly absorbale formulation, mode of action, and clinical applications. 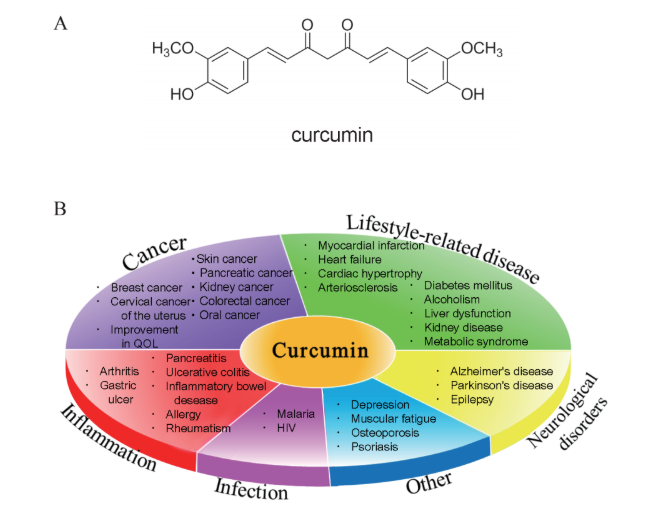 A: Chemical structure of curcumin

B: Various diseases against which curcumin may have therapeutic effects [check]

2. Development and clinical application of THERACURMIN®

Curcumin (Fig. 1A) is highly lipophilic, and its poor bioavailability after oral administration has been the major challenge limiting the clinical application of curcumin 1). We therefore used nanoparticulation and surface processing techniques to develop THERACURMIN® (THERAVALUES CORPORATION, Chiyoda-ku, Tokyo, Japan), a highly absorbable curcumin formulation that is easily and stably dispersible in water 4). In this section, clinical studies that have been conducted in humans to evaluate the health effects of THERACURMIN® on alcohol metabolism 4), liver function, and the skin are reviewed.

I) Development of THERACURMIN ®

Among a number of attempts that have been made to improve absorption of curcumin, THERACURMIN® has shown one of the most promising results.

Studies investigating the absorption of THERACURMIN® in rats and humans after oral administration 4) found that the blood curcumin concentration increased dose-dependently in both species, while the area under the blood concentration-time curve (AUC) was more than 30-fold higher in rats and more than 27-fold higher in humans compared to that of curcumin bulk powder. Given such a high absorbability, clinical studies of THERACURMIN® to evaluate health benefits were initiated.

We conducted a crossover study to evaluate the effects on liver function after oral administration of THERACURMIN® that contains 30 mg of curcumin 30 minutes before alcohol intake (n = 7) 4). The alcohol-related increase in blood acetaldehyde concentration was significantly reduced when THERACURMIN® was received compared to the time when subjects did not take THERACURMIN®.

In another study, THERACURMIN® was orally administrated to healthy volunteers (n = 19), including those with relatively high values for liver function markers such as gamma-glutamyl transpeptidase (γ-GTP), aspartate transaminase (AST) , and alanine transaminase (ALT), at a dose of 90 mg twice daily in the morning and evening for 1 month, with little lifestyle modification. Significant decreases were observed in overall mean AST (−12%, p = 0.016), ALT (−16%, p = 0.041), and γ-GTP (−15%, p = 0.010). Further, liver function was more markedly improved in subjects who had higher baseline values than in relatively normal ones.

While curcumin has long been believed to benefit the liver, its exact mechanism of action is poorly understood. The findings that THERACURMIN® reduced the alcohol-related increase in blood acetaldehyde concentration and normalized liver function markers will be helpful in clarifying how curcumin can be therapeutic to the liver.

Exposure of the skin to ultraviolet radiation induces NF-ĸB activation and promotes inflammation, resulting in abnormal keratinization, pigmentation associated with proliferation of melanocytes, and collagen degradation in the skin (Fig. 2) 5). Curcumin has been reported to exert not only an antioxidant effect, but also anti-inflammatory effect by inhibiting NF-ĸB activation followed by inhibition of the expression of collagen degrading enzymes, and is thus expected to have an inhibitory effect on the progression of skin damage.

To further examine such properties, we evaluated the efficacy of THERACURMIN® in improving skin damage in an ultraviolet irradiation-induced pigmentation model of brown guinea pigs. In animals that received THERACURMIN® by gavage at daily doses of 1 and 10 mg/kg as curcumin for 4 weeks, pigmentation was inhibited by 6% to 18% based on skin brightness at the site of ultraviolet irradiation compared to that of the control group.

In healthy women who received THERACURMIN® at doses of 30 and 90 mg as curcumin twice daily in the morning and evening for 4 weeks, the skin moisture level significantly increased from baseline (average 15% increase). In addition, dose-dependent improvement was observed based on findings via diagnostic imaging of spots, wrinkles, and pores on the facial skin.

Fig. 2. Ultraviolet rays may affect the skin through NF-κB-induced inflammation.

Recent basic research has shown that one of the critical curcumin’s mechanism of actions is the inhibition of NF-ĸB activation. Thus, in addition to the effects on the liver and skin described above, THERACURMIN® is also expected to be effective against a number of conditions related with chronic inflammation, including cancer, heart failure, dementia, exercise-related muscular fatigue, and arthritis. Its high absorbability also suggests that the THERACURMIN®  can maximize the potential biological effects expected with curcumin. Several clinical studies investigating these potential effects are currently underway.

In recent years, Japan has seen a rise in the number of patients suffering from hypertension and arteriosclerosis due to lifestyle changes, subsequently resulting in a surge in the incidence of hypertensive heart disease, myocardial infarction, and the final stages of heart failure. Given Japan’s aging population, which is already at increased risk of such illnesses, these numbers are expected to continue to rise, putting great economic and social strain on the country. As such, methods for preventing and treating heart failure have therefore received a great deal of attention, and we describe curcumin as one potential candidate in the present section 6).

I) Search for a molecular target

Several studies have reported that expression of a number of genes is affected on development of heart failure. Effectively treating this disease therefore requires identification of common nuclear pathways for therapeutic targeting. In our own studies, we identified cardiac-specific GATA transcription factors as a potential target for such pathways during cardiomyocyte hypertrophy 7-11). Subsequently, we considered whether or not the activity of histone acetyltransferases (HATs) plays an important role in the development of heart failure, as excessive nuclear acetylation can be observed in left ventricular cardiomyocytes after the onset of myocardial infarction. We found that both p300, a transcriptional coactivator with HAT activity, and GATA transcription factors (p300/GATA pathway) play a primary role in gene expression regulation leading to heart failure 12-14). More specifically, overexpression of p300 in cardiomyocytes induced cardiomyocyte hypertrophy depending on HAT activity, whereas a p300 mutant completely lacking HAT activity showed no such hypertrophy 15).

In addition, we bred a strain of mice overexpressing p300 in the heart which subsequently developed cardiac hypertrophy and experienced heart failure 8). During this development, acetylation of not only histone but also the cardiac-specific transcription factor GATA4 increased, indicating that the hypertrophic response gene was more likely to bind to the promoter. Further, cardiac remodeling was markedly increased after the onset of myocardial infarction. However, in mice overexpressing the p300 mutant lacking HAT activity in the heart, the increase in remodeling was similar to that seen in wild-type mice 15). These data suggest that p300 HAT activity is a potential target for heart failure therapy.

Given recent findings that curcumin is a specific inhibitor of p300 HAT activity 16), we investigated whether or not this inexpensive, natural compound with an established safety profile could be used in heart failure therapy.

Following the above in vitro studies, we investigated curcumin’s inhibitory effect on the progression of heart failure in two different rat models of heart failure 17). Salt-sensitive Dahl rats, a model of hypertensive heart failure, were orally administered curcumin at 50 mg/kg/day for 7 weeks during the transition from compensatory hypertrophy to heart failure (from 11 to 18 weeks of age). Findings on echocardiography showed that curcumin significantly improved left ventricular fractional shortening (FS), an index for cardiac contractility. Curcumin also inhibited left ventricular wall thickening and hypertrophy of cardiomyocytes, as well as increases in p300 protein levels, GATA4 acetylation, and binding of GATA4 to p300 in the heart.

However, despite the above-described promising findings of curcumin inhibiting cardiomyocyte hypertrophy in cultured cardiomyocytes as well as the development of heart failure in rat models of hypertensive heart disease and myocardial infarct, both common causes of heart failure, curcumin’s capability of inhibiting the development of cardiac hypertrophy characterized by preserved systolic function and decreased diastolic function at earlier stages of hypertension remained unknown. In a subsequent study, salt-sensitive Dahl rats fed a high-salt diet from age 6 weeks developed marked hypertension which progressed cardiac hypertrophy with conserved systolic function and diastolic dysfunction by age 11 weeks.